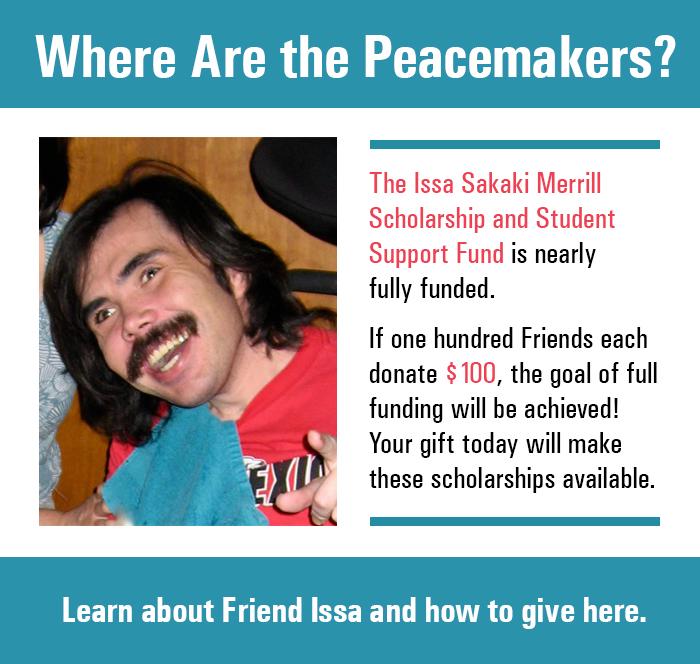 Location for the Donation to University of New Mexico Foundation

Issa Merrill's Scholarship fundraising announcement was made on 8/8/2020.

(75th anniversary of the bombing of Hiroshima and Nagasaki)

Birthright Quaker man Issa Merrill, member of Albuquerque Meeting (8/8/1980 - 2/23/2013) was inspiration for a scholarship for peacemakers in his memory. To activate it we hope for 100 Friends to give $100 to: https://www.unmfund.org/fund/issa-sakaki-merrill/

The Issa Sakaki Merrill Scholarship and Student Support Fund will be available to graduate or undergraduate students in Arts and Sciences at the University of New Mexico who have demonstrated interest and who have background in conflict, conflict resolution, showing promise in the study of Peace Making.  The fund is intended primarily for scholarship support, but may also be used to support internships, for academic credit, conference fees, and travel expenses.

The Dean of Arts and Sciences will direct the selection process.

Our friend, Issa Abraham Sakaki Merrill, was born on August 8, 1980 and was always a part of the Albuquerque Monthly Meeting.  The son of Corrales, NM poet and author Carol Merrill and of Japanese poet, Nanao Sakaki, Issa was named for the 18th Century poet Kobayashi Issa.  Growing up, he lived in Albuquerque and Taos NM and for one year was an unofficial "baby ambassador" to China while his mother taught English in Qu Fu, Shandong, China.  As a child he attended First Day School with Albuquerque Friends Meeting.  His mother remembers that for a while they attended another group, but he asked to return to the Quakers—telling her that was where he belonged.  As a young teen he joined other meeting youth picking pumpkins on Blue Moon Farm to take to the Storehouse, for hikes in the mountains and on an expedition to cut Christmas trees.

Stricken in his teens by Batten's Disease, a progressive neurological disorder, Issa nevertheless was active in his high school and founded the Cibola High School Student Citizens' Organization (CHSSCO) to provide a forum for student and administration constructive problem solving.  He was also an enthusiastic advocate and organizer for Albuquerque Sister Cities projects, raising funds and locating host families for teenagers from five sister cities to visit Albuquerque.  Even as a teen, Issa was strongly motivated by the idea that we needed to make a lot of friends around the world in order to build a peaceful future.

Issa pursued his interests by studying political science at the University of New Mexico.  Though he was unable to continue past his junior year due to vision and mobility problems, he maintained an avid interest in politics.  He traveled to Washington with a local radio personality and advocate in order to lobby for legislation related to meeting the needs of blind people.  A proud possession was a letter from then-Congressman Bill Richardson saying that Issa's visit had moved him to support genetic research.  After extensive work in the Bill Richardson campaign for New Mexico governor, Issa was proud to say he was on a "first name basis with the governor."

Throughout his life, those who came in contact with Issa noted his cheerful and outgoing personality, his lively interest in people and political issues, and his sense of humor.  A college room-mate and old friend said that from childhood, "he was always one of the funniest and brightest people in the room."  As a college student living in a dorm, he found that a number of students stopped by to share troubles with him, appreciative of his caring and insightful listening—along with the physical difficulties he was also managing.

As his abilities deteriorated, Issa faced his ordeals with laughter and continued enthusiasm for progressive causes.  As his room-mate remembered, "I hated seeing him after he had a seizure, but Issa always took everything with such good cheer and was rarely p o'd about his situation. His approach to life is an inspiration to anyone."  Issa also loved playing the didgeridoo, the Dave Matthews Band, dogs, fishing, wildlife rescue, the St. Louis Cardinals, poetry and the NM Museum of Natural History and Science.   Volunteering as a docent at the museum, he was instrumental in designing accessibility features for their "hands-on" experience room.  For the last five years Issa was a resident at an ARCA home for the disabled.  He was a vital member of this loving community, and his death was marked with sorrow and his life with gratitude by the other residents and the ARCA staff.  When he was frustrated or, rarely, difficult due to his situation, he usually was still able to respond to humor expressed by caregivers, friends, and family.

Issa's life and beliefs will be commemorated through a scholarship at the University of New Mexico for students in Arts and Sciences who are interested in Peace Making.  In the last months of his life Issa knew about this and was pleased.